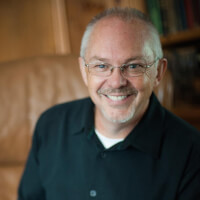 William Paul Young is a Canadian author, best known for The Shack, a novel.

Young was the eldest of four, born May 11, 1955, in Grande Prairie, Alberta, Canada, but the majority of his first decade was lived with his missionary parents in the highlands of Netherlands New Guinea (West Papua), among the Dani, a technologically stone age tribal people. These became his family and as the first white child and outsider who ever spoke their language, he was granted unusual access into their culture and community. By the time he was six, he was flown away to a boarding school.
Young had written primarily as a way to create unique gifts for his friends, until his wife repeatedly urged him to write something for their six children in order to put down in one place his perspectives on God and on the inner healing Young had experienced as an adult. The resulting manuscript, that later became The Shack, was intended only for his six kids and for a handful of close friends.

Young initially printed just 15 copies of his book. Two of his close friends encouraged him to have it published and assisted with some editing and rewriting in order to prepare the manuscript for publication. Rejected by 26 publishers, Young and his friends published the book under the name of their newly created publishing company, Windblown Media in 2007. The company spent only $200 in advertising; word-of-mouth referrals eventually drove the book to number one on the New York Times trade paperback fiction best-seller list in June 2008. «The Shack» was the top-selling fiction and audio book of 2008 in America through November 30.
Young considers himself a longtime devotee of C.S. Lewis. Young credits C.S. Lewis for his interest in the themes of characters exploring tough questions that often keep them from faith in God.

Вільям Пол Янг
Read the author's books online or in the application, which can be downloaded from the link below. William Paul Young's books best known for such topics as роман.