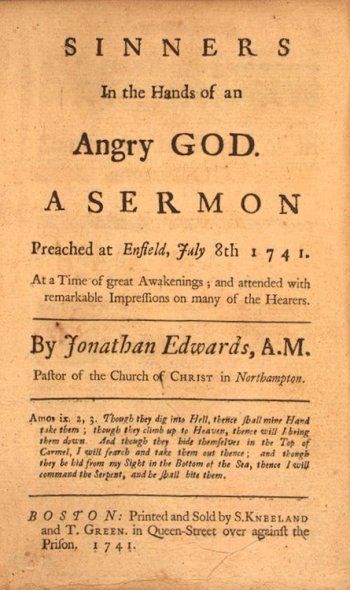 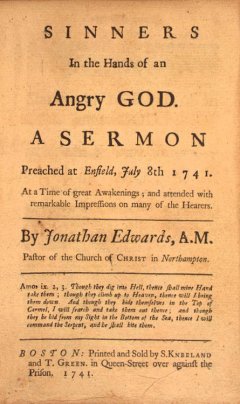 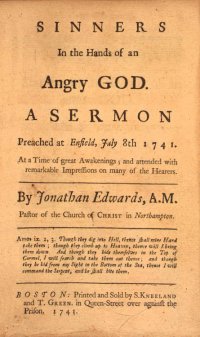 Sinners in the Hands of an Angry God

Sinners in the Hands of an Angry God is the most famous deprecatory sermon by that splendid revivalist of the Great Awakening, Jonathan Edwards. Preached at Enfield, July 8th 1741. At a Time of great Awakenings; and attended with remarkable Impreffions on many of the Hearers.

Jonathan Edwards was born on October 5, 1703 in East Windsor, Connecticut, to a pastor’s family. At the age of 13, he entered Yale College, received a bachelor’s degree there in 1720, and a master’s degree in 1723. For a time, in 1722–1723, he was pastor of the Presbyterian Church in New York, and then returned to Yale, where he began to teach. In 1727, he accepted an offer to become assistant pastor at Congregational Church in Northampton, Massachusetts.

After the death of Solomon Stoddard in 1729, Edwards became the pastor of the Northampton Church and remained so until 1750. During this time, he became the protagonist of several revivals in the mid-thirties of the eighteenth century, as well as the Great Awakening of 1740–1742. He published several sermons and treatises, including the Treatise on Religious Sentiments in 1746. Thanks to his sermons and writings, Edwards soon became known worldwide as the most prominent American pastor, theologian and thinker.

Ironically, in 1750 Edwards was removed from the position of pastor of the Northampton congregation. He soon moved to the border town of Stockbridge, Massachusetts, where he served as a missionary to the Mohawk and Mohican Indians. He continued to write, published such works of his as «Free Will» (1754) and «Original Sin» (1758).

The Board of Trustees of a college in New Jersey, now called Princeton University, invited Edwards to become president of the institution. In January 1758, Edwards accepted the offer. But two months later, on March 22, he died.

Edwards left behind a large legacy: eleven children, seventy-two grandchildren, and a large number of works, many of which were published after his death. The books continue his life’s work — the work of the pastor of the church.