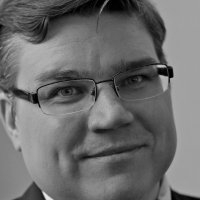 Evgeny Bakhmutsky was born on May 20, 1976 in Siberia in the Kemerovo region. Since 1993, he has been actively involved in youth ministry, including holding camps for children and youth. In 1997–1998 he received two degrees in management and strategic planning from Kuzbass State Technical University.

Since 1998, at the request of the regional council of ministers of Western Siberia, he moved to Novosibirsk, where he graduated from the Bible School and headed the youth ministry in the region.

From 2000 to 2004 he studied at the Novosibirsk Theological Bible Seminary (M. Div.), At the same time helping the development of a number of local churches in Novosibirsk, as well as overseeing youth ministry throughout Siberia.

In 2002 he was elected to serve as the youth leader of the Russian Evangelical Christian Baptists Union. In 2003 he got married. The wife's name is Tatiana. In the same year he was ordained to the priestly ministry. Today they have four children: tow sons and two daughters.

In 2004, at the request of the leadership of the brotherhood, he moved to Moscow, where he continued to form the youth department of the Union and help in the development of the 2nd Moscow Church of the Evangelical Christian Baptists. In 2009 he participates in the opening of a new church in Moscow — the Russian Bible Church, where he is a pastor-teacher. In 2010, at the 33rd Congress of the Brotherhood, he was elected 1st Deputy Chairman of the Russian Union of Evangelical Christians‑Baptists.

In 2014 he received his PhD from the Baptist Bible Seminary in Pennsylvania. He actively conducts and participates in youth, pastoral and missionary conferences both in Russia and abroad. He conducts a weekly radio program "Hour of Trends", writes books and articles. Teaches at seminaries. Editor-in-chief of the main journal of the Russian Union of Evangelical Christians‑Baptists "Christian Word". Religious expert at the relevant committee of the State Duma of the Russian Federation.

Евгений Бахмутский
Read the author's books online or in the application, which can be downloaded from the link below. Evgeniy Bakhmutsky's books best known for such topics as кайнония, призвание, финансы, секс, церковь.